A Night in The Desert

“The waters of the overflowing and fast Djeikhun River were muddy because of the amount of earth they were carrying. The waters deposited the earth over the flooded areas, where it hardened… and dried. The lake receded until the entire Khorezm appeared.”
Al-Biruni

Do you want to learn the history of the Ancient Khorezm? Do you wish to lift the veil of mystery over the birth of Zoroastrianism, one of the most interesting religions of the world? We invite you to visit the country where the Amu Darya River flowing through the Kararum and Kyzylkum Deserts shaped the destiny of the villages and cities of the Ancient Khorezm. The river was the cradle of various states, and along its banks the cities, fortresses, temples and palaces were built, gardens were planted and caravan routes were established..

Highlights of the tour:

This route was designed and been updated taking into account the recommendations of experts, however, we are always ready to make changes in accordance with your requirements.

The Tower of Silence. Departing the hotel in Nukus at 8:30 am. First stop at Chylpyk, the Tower of Silence, built for the Zoroastrian excarnation rituals. In accordance with the Zoroastrian faith, the sacred elements, such as the fire, the water, the earth and the air, could not be desecrated, that’s why the remains of the dead were left atop a tower exposed to the elements and birds of prey which would remove the flesh. After that the bones were collected, cleaned and places in special ossuaries. [2]

Djampyk-Kala Port City. The first ancient structures were built in this area during the period of 4th century BC-1st century AD. Here you will see the magnificent medieval walls of the city that is well-preserved because it was built on the Sultanuizdak Mountain Ridge. One of the most beautiful cups painted with luster paints was found during the archeological excavations in this area. The cup is now on display in the Savitsky Museum. This finding confirms that the city was a port that traded both with the West and the East. [3]

Badai Tugai Nature Reserve. covering the area of 6.5 hectares, was established in Karakalpakstan to preserve one of the last tugai forests along the eastern bank of the Amu-Darya River. The Reserve is the home for multiple species of birds and small mammals and the population of Bukhara deer.
Travel to Akshakol Lake. Lunch and free time. [3]

Toprak-Kala. was the castle of the Khorezm rulers (shahs). The castle with tree magnificent towers was built in the 3rd century and was the residence of the shahs of Khorezm till 305. The excavated town includes the buildings along the street of the inner part of the fortress and the outside northern complex. Topkar-Kala is called the art museum of the ancient Khorezm. The sculptures and painting inside the palace of the Khorezm shahs are considered the major archeological findings.

Buston Museum. This is a small interactive, beautiful and well-kept museum.

Ayaz-Kala (overnight stay, dinner and swings. Ayaz-Kala yurt camp. You’ll meet Dilbar apa, the owner of the yurt camp, and her family, and enjoy the delicious dinner prepared by Rano apa.
You will spend the night in a yurt under the starry desert night.

Pictures with camels. The yurt camp has a camel farm. You can take pictures with the Bactrian camels.

Djambas-Kala. is one of the remote frontier fortresses built in the 4th century BC. The main feature that makes this fortress stand out is the lack of the corner and wall towers. Remains of the Neolithic dwellings in Khorezm were first found around Djambas-Kala. 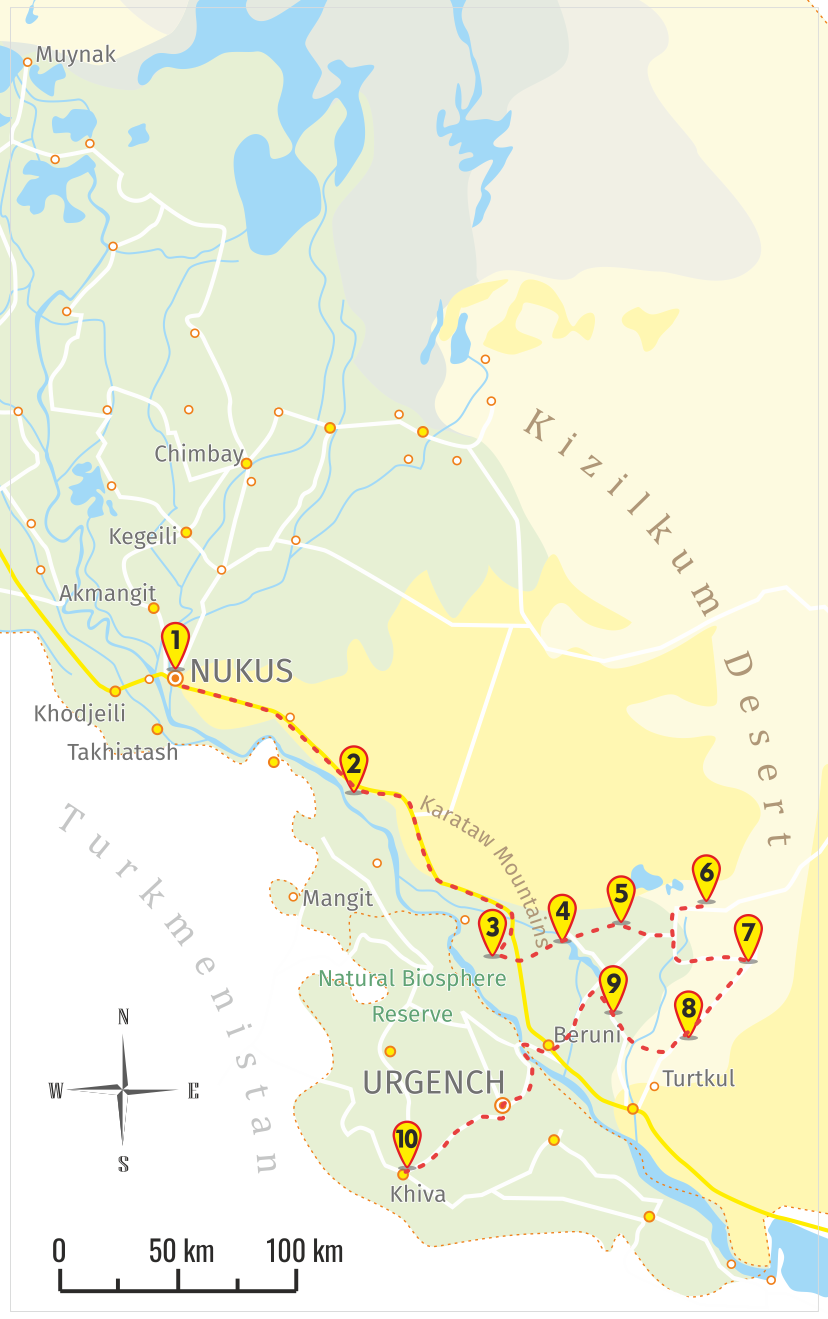